Energy Resources is the holder of nine exploration permits across five locations in the onshore Perth Basin, which extend from Harvey Shire south of Perth to the Mingenew Shire in the north. 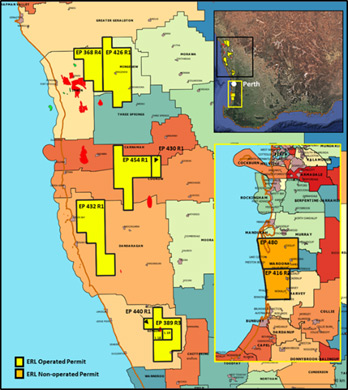 Oil and gas exploration begins by examining the local geology to assess if the ground is likely to have the kinds of rocks that can produce oil and gas and can form reservoirs that can hold oil and gas. The two principal methods for exploration of oil and gas requires the analysis of seismic surveys and drilling information.

Seismic surveys are used to produce detailed images of multiple layers of rocks within the Earth’s subsurface. This information can be used to determine the size and location of potential oil and gas reservoirs.

Sound waves are bounced off underground rock formations and the waves that reflect back to the surface are recorded for analysis. Analysing the time the waves take to return provides the information about rock types and possible gas or fluids in rock formations. The technology used in seismic surveys is very similar to that used in ultrasounds in medicine.

Onshore operations use specialized trucks that carry a heavy plate that is vibrated to generate a seismic signal. Seismic information is used to accurately plan locations for wells, which reduces the need for further exploration, minimising the environmental impact.

At the end of the drilling campaign, the well may be plugged and abandoned, the equipment demobilised and the site decommissioned, following which the site will be rehabilitated. Alternatively, if hydrocarbons are found, the well may be retained for further evaluation and potential production.

During and after the drilling of an exploration well, information is acquired in various ways, including:

These tests give a clearer picture of whether oil or gas is present and if it can be commercially recovered.